We have 110 guests and no members online

Peace and Freedom Party endorses the Free Lula Rally and Celebration hosted by our comrades of PSL Los Angeles to be held on Saturday, October 26 beginning at noon. The event will be held at the Brazilian Consulate in Beverly Hills (MAP). 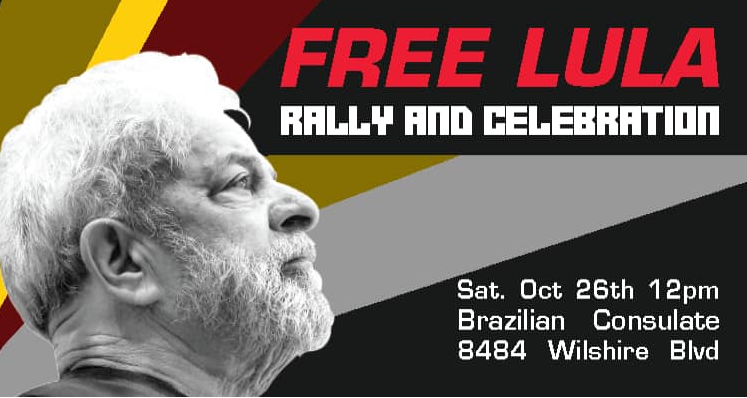 On October 27th, the most popular president in Brazil’s history will spend his 74th birthday behind bars. Lula Da Silva is a metalworker and trade union leader who helped found Brazil’s main left party, the Partido dos Trabalhadores (trans. Workers Party) or PT. He won two consecutive presidential elections and, as president, raised the living standards of poor and oppressed people across the country, ushered in environmental protections and ultimately won the highest approval rating in the country’s history at the end of his second term.

Lula’s run in the last presidential election was cut short after he was wrongfully arrested to prevent his expected victory, which would have been a people’s victory. As a result, Jair Bolsanaro is in power, the Amazon is burning, and the indigenous people and activists are in danger in Brazil. As long as Lula is in jail, Brazilian democracy and progress are also imprisoned.

Join us in celebrating Lula’s 7th birthday and demand that he be free immediately! Join us to stand with the working class in Brazil against corruption and defend democracy!