We have 111 guests and no members online 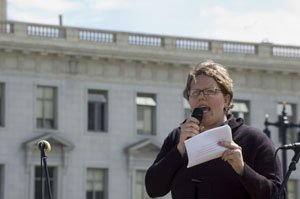 Since Nathalie Hrizi joined the historic Seattle protests against the World Trade Organization in 1999 at the age of 18, she has committed herself to the movements against war, racism, and bigotry, and to the struggle to improve the lives of all workers, whatever their immigration status. In a logical extension of her involvement, she was nominated for Congress by the Peace and Freedom Party in the 12th District, covering southwest San Francisco and most of San Mateo County.

Nathalie said "I am running to say NO to war, racism, and exploitation. The rights of the billionaires, bankers and militarists to turn a profit should never be a priority over the rights of the majority - working and oppressed people - to housing, health care, education, and jobs."

Nathalie Hrizi is a bilingual elementary school teacher in San Francisco, and a member of United Educators of San Francisco. She was a co-founder of the Committee for a New Colombia, that opposed oppression and the murder of trade unionists in Colombia. A member of the Party for Socialism and Liberation, she often writes for Liberations newspaper and www.pslweb.org.