We have 85 guests and no members online 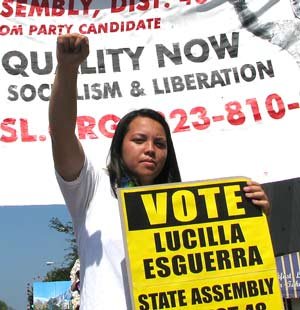 As the youngest candidate for any partisan office in California in 2008, Lucilla Esguerra offered a unique qualification: she is not just aware of the problems of young people, not just concerned about their issues, but she is one of them, and an effective leader in bringing their needs to society's attention. Just turned 19 in August, she was 18 when she won the Peace and Freedom Party nomination as its standard-bearer in the 48th Assembly District in central Los Angeles.

Lucilla Esguerra was born in Los Angeles County, where she has been active in struggles for peace, for immigrant rights, and for same-sex marriage rights. An activist with Act Now to Stop War and End Racism, she has helped organize mass demonstrations against the wars in Iraq and Afghanistan. She has mobilized resistance to the racist Minuteman Project, and built support for the May Day rallies for immigrant and labor rights, with amnesty for undocumented immigrants. She is former president of the Gay-Straight Alliance at the Sherman Oaks Center for Enriched Studies, Vice President of Coalition for Equal Marriage Rights LA, a member of the National Committee to Free the Cuban Five, and a youth leader in the Party for Socialism and Liberation.