We have 80 guests and no members online

Visit our 2016 campaign site at peaceandfreedom2016.org

The Peace and Freedom Party has long advocated many of the things Bernie Sanders brought to the fore during his primary campaign. Things like tuitionfree college and university education, free healthcare, and housing for all are things we, as a party of the working class, support.

Register to vote with the Peace and Freedom Party

Candidates speak in Oakland on April 17

On April 17, the Alameda County Peace and Freedom Party sponsored a candidates forum in Oakland. The event featured all three candidates for the party's presidential nomination -- Dr. Lynn Kahn, Gloria La Riva and Monica Moorehead -- and our candidate for U.S. Senate, John Parker. The forum was moderated by Alameda County Central Committee member Mary McIlroy. This video transcript was made by the Party for Socialism and Liberation and is posted here by permission.

First half of the forum (approximately one hour):

Clicking on a candidate’s name takes you to her or his page on our 2016 campaign site, peaceandfreedom2016.org.

Presidential Primary: The State Central Committee has not taken a position for or against any of the three candidates in the Peace and Freedom Party Presidential primary.

Legislative offices: The Peace and Freedom Party has endorsed these candidates for Congress and the State Legislature..

Local elections: positions taken by county central committees are summarize on this page.

Presidential and Senate candidates forum hosted by the Alameda County Peace and Freedom Party and Movement. The speakers are:

Activists Protest Exclusion from the Ballot 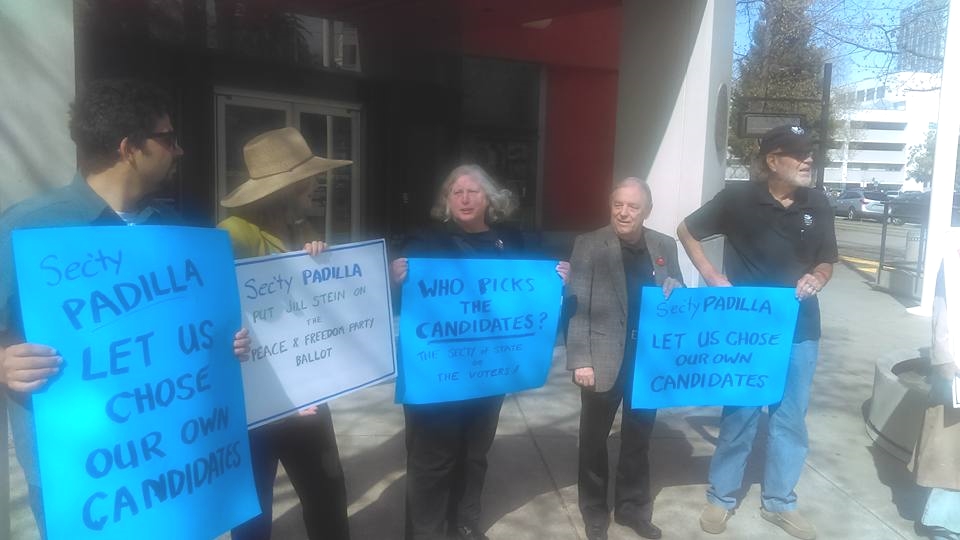 Fifteen people, mostly members of the Peace and Freedom Party of California, along with others concerned about ballot access and democracy, protested in front of the Ca. Secretary of State’s office in Sacramento on Thursday, March 24 at 11:00 a.m. The Secretary of State is not listing Jill Stein, one of four names submitted by the party for the June 7, 2016 Presidential primary ballot, and has not publicly stated any reason for this omission.

On Jan. 18, 2016, Debra Reiger, the State Chairperson of the Peace and Freedom Party of California, submitted the names of four women who have declared that they are seeking the party’s nomination for President: Dr. Lynn Kahn, Gloria LaRiva, Monica Moorehead, and Dr. Jill Stein. So far, only the first three will be listed as PFP candidates on the June primary ballot. The Secretary of State can correct this before the list is finalized on April 1.

The 2016 State Convention, which will nominate the Peace and Freedom candidates for President and Vice President, will be held on August 13 and 14 at the Hawthorne Suites, 321 Bercut Drive, in Sacramento.

Debating the 2016 Presidential Election, February 5-6 in the Bay Area

Posted on January 28, 2016 by the Communications Committee

What: Presidential Election Forum
Sponsor: Socialist Action, Green Party, Peace and Freedom Party
Contact: 510-268-9429 This email address is being protected from spambots. You need JavaScript enabled to view it.
Cost: $20-$10 sliding scale. No one turned away for lack of funds

Posted on January 31, 2016 by the Sacramento County Central Committee

Posted on January 4, 2016 by the Communications Committee

Posted on December 14, 2015 by the Communications Committee

The following is a general introduction to the processes for the coming 2016 election. Anyone seriously considering running for political office as a Peace and Freedom candidate is also advised to consult with Party officials, local PFP organizations, the California Secretary of State and local county election officials.

As a ballot qualified party, the Peace and Freedom Party is entitled to place its nominee for President of the United States on the November ballot in California. Candidates considering seeking the Peace and Freedom Party nomination for President need to contact us, if they have not already done so, using this contact form. The following is only a summary.

Read more: Running for Office in 2016

Become a Leader in the Peace and Freedom Party

Posted on December 14, 2015 by the Communications Committee

Every organization needs to have a dedicated, hard working group of people to organize, build and help it grow. This is its leadership body.

Read more: Become a Leader in the Peace and Freedom Party