We have 294 guests and no members online

This statement was issued by California State Chair Debra Reiger on December 21, 2014.

Michael Brown was shot dead by police in Ferguson, Mo. Eric Garner was strangled while in a police chokehold in Staten Island, New York. Neither man had committed any more than a petty crime, and even that is questionable because neither man had a chance to be tried.

These and other recent police murders of unarmed black men, and the fact that the state authorized killers will not face prosecution, have sparked rallies and actions against police violence all over the county. 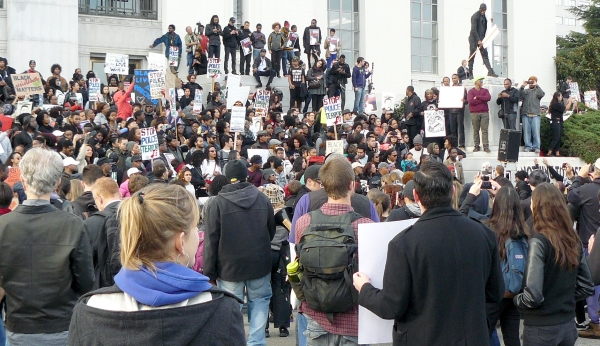 Demonstrators respond to the call, "Black and brown, on the steps," at the Alameda County Courthouse in Oakland on December 13 (photo by George Cammarota)

The slogan of the growing movement, "Black Lives Matter," is a fitting response to the fact that African American people, particularly young men, are per capita more often the victims of police violence than are members of any other group. According to the Center for Disease Control, the rate at which black people are killed by law enforcement is three times higher than that of white people.

The statistics are more alarming for young black men. According to ProPublica, a leading investigative and data journalism outlet, young black males are 21 times more likely to be shot by police than their white counterparts. Their report of Oct, 2014 states, "The 1,217 deadly police shootings from 2010 to 2012 captured in the federal data show that blacks, age 15 to 19, were killed at a rate of 31.17 per million, while just 1.47 per million white males in that age range died at the hands of police."

When we chant "Black Lives Matter" we are asserting all of our humanity. We are saying that no one should stand for the systematic brutalization of African Americans by the government’s organs of social control. We will all benefit when we create a more just society. That can’t happen as long as we allow the oppression of a group of our fellow human beings to continue.