We have 216 guests and no members online

Activists to San Francisco government: Give housing to the homeless!

On Tuesday, May 12, activists held a press conference in front of San Francisco's City Hall to demand that the city house the homeless in hotels under decent conditions, including for undocumented workers, as well as emphasizing the need for rents and mortgages to be cancelled nationally.

Speakers were Gloria La Riva (pictured below), speaking as presumed presidential nominee of Peace and Freedom Party in California, and national candidate for Party for Socialism and Liberation. Rev. Tom McAninly of Berkeley Fellowship Church, Erika Hidalgo of PSL, and Nick Pardee for ANSWER Coalition were the other speakers. ABC Ch. 7 broadcast the event on the evening news. 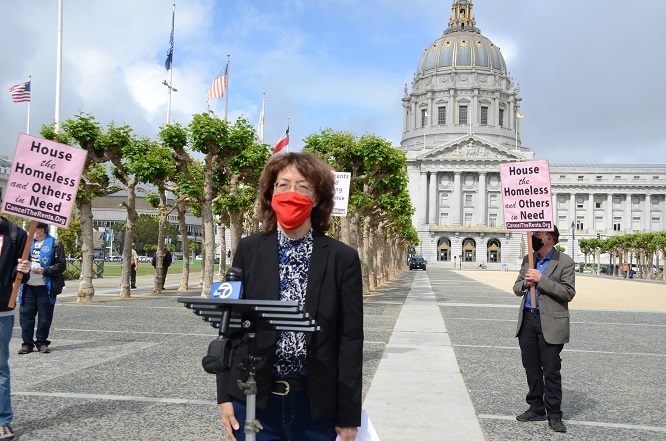 Mayor London Breed claims not all homeless people can be housed, although there are thousands of rooms available that the City has procured. Speakers pointed out that the housing crisis began long before the Pandemic, and that a socialist solution would be able to assure everyone a life of dignity, with jobs or income, housing and education.